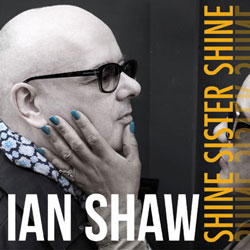 I ran my first 10K – ever – to these songs, on a cool morning in country backroads as mist lifted to reveal an early and golden morning. I ran my middle-aged, twice-cancered, arthritic, feminist, queer body to this album and Ian's voice. His music, his force and that of the glorious women he is channeling and championing here kept me going. This is an album of songs to run to and to crawl to. Here is music to sob to and anthems to change the world – still so much world to change.

A new take on an old song for Joni Mitchell's always relevant Shine, reminding us that there are so many sides to truth, to every hurt. Light and dark, because there is not one without the other, no life without death, the dichotomy held here very gently, so we can allow the pain and not be broken by it.

Keep Walking's true story of Ian's friend Sara. From Eritrea to Libya to Calais to Birmingham and the UK asylum system. A tale of someone else's pain, sustained in song, that we might feel it ourselves, maybe even feel it enough to make a difference. In action, there is hope.

Ian's open-hearted version of This Beautiful Life is a full-throated call for a shining existence, and a vital panacea for the also-truth of Trip And Tumble's collapse, crumble, stumble from grace.

Tanita Tikaram and Ian's Shine Sister Shine becomes a sing-a-long, march-along, dance-along paean to the LGBT community &ncash so much achieved and still so far to go, both out in the world and among ourselves. Ian says the 'Sister' here is every gender and sexuality, all of us – shining.

Too many to list, but every one of these tracks offers a gift for the listener willing to let someone touch your soul. These are songs to hold us when we ask why, to promise that it's not only good to cry, but right to do so. They are also songs to prompt us when we ask how – how do we make a difference, how do we create value in our individual lives, in a carry on world, starring everyone of us?

This is an album crammed with sharp pain, deeply felt, then countered with soaring, resonant hope. Empire States Of Mind for all. We see what hurts, we cry the tears, and because we know there is also life, also light, we dig deep and find the strength to make a change.

Start with a soundtrack for hope.

Stella Duffy OBE is a writer and theatremaker.