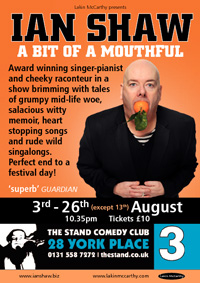 Praise for Shaw's latest show, A Bit Of A Mouthful

this is comedy with soul — Edinburgh Evening News

Shaw tackles his own introspection, confronting middle-age while exhibiting an impressive musical prowess — The List

Shaw is self-deprecating and easy to like — Edinburgh Fest

A Bit Of A Mouthful is a show I do all on my own, rather than with a jazz trio, a Big Band… or a full orchestra. It's a collection of musical observations (with the odd sing-along!) charting the (ahem!) early middle years of an overwrought, overweight homosexual, in and out of love… but constantly (aren't we all?) on the prowl. When I was writing the show, the lyrics often came out a bit "Tourettsey" and for this I'm afraid I have to make no apology!

I have managed to lure a shower of performing pals to come and sing… so the spesh guests will include Arthur Smith, Judith Owen (from last year's hit, Losing It with Ruby Wax), the wonderful Hattie Hayridge, Rory Bremner, Bob Downe, Dean Friedman, Barbara Nice and the extraordinary Leanne Jones (Molly Wobby's Tit factory)

Is this your first Edinburgh Fringe?

I was at EdFest in the late nineties in a show called Hell Bent, Heaven Bound which was nominated for a Perrier Award. I acted in a Fran Landesman play called Forbidden Games at The Pleasance in '98, and in 2006 I did a concert of Joni Mitchell songs at the Queen's Theatre.

You're a renowned Jazz vocalist, musician, music producer, actor and comedian (I hope we haven't left anything out). What attracted you to Stand-Up Comedy?

Well, it's more "Sit Down Comedy" with me. I'm a bit useless at the pacing, prowling, leany-on-the-mike stand blokey business. So my funny stuff comes out of the stories in the songs. I am a HUGE Stand Up fan though and have mahoosive respect for comics.

You've worked with some of the very biggest names in both comedy and music, but do you have any hot tips for the future?

Never use hair gel as lube (sorry Sarah!!!) and vinegar and newspaper is a boon for your windows.

You had a leading role in Richard Thomas' and Stewart Lee's notorious Jerry Springer the Opera, which was forced to close down due to a homophobic campaign by Christian Voice. Did you think the musical was "blasphemous"?

Doing Jerry Springer The Opera was so much fun as I was cast in it AS it was being written. The lyrical content was SO relevant at the time, exposing, with stunning, achingly beautiful music, the freaky, (almost new then) obsession with "being someone" (now we have that fatuous desperation on the box every night, whether it's pop singing, giving dinner parties, or being the next Jesus). Blasphemy can only exist if faith is mutually applauded then marginalised by derision. Neither of these things should be held particularly aloft in good art. The church, in all its sickening, money laundering blind faith, has never held a mirror up, and never will. It's futile to think otherwise. And that piece, by Stewart and Richard, was ground breaking in so many ways.

Who are your biggest influences?

What do you love/hate about Edinburgh?

I love Edinburgh – in and out of Festival time. Love the topography, the air, the Scots (I just presented The Scottish Jazz Awards here) love Henderson's, The Jazz Bar, CC Blooms, salt'n'sauce on me chips, good Scotch… endless! The only thing I'm hating is my performance nerves, which start at about 4pm. But they're kinda good nerves. I don't get nervous singing jazz or acting (look out for "Titus" a new British film… I play Eric, a miserable jazz club owner. Ann Mitchell is also in it. But COMEDY!!! What a larf!

Do you plan to see any other shows whilst you are here?

I'm thrilled to know personally a raft of brilliant performers, in all fields. Have seen Leanne Jones in Molly Wobby's Tit Factory which I think will be the hit of the festival. I will be seeing David Mills in Smart Casual. He is unique. Bob Downe I can't wait to see. God in a Bag at the Underbelly is lovely and has my friend Hattie Hayridge in it playing a waitress. The Horne Section at The Grand is amazing… I will be guesting too on that. Mrs Nice with Barbara Nice is the feel good show to end the genre. Stephen K Amos: Work in Progress I am relishing, and we share a nightly blether in the Green Room at The Stand. He's a love.

It feels wrong to label Ian Shaw purely as a musical comedian. There is no doubt he is funny, the show is packed with playful remarks and witty lyrics, but it is his exceptional music talent that makes his show a must-see.

Jazz fans pack into some of the largest venues in the country to hear Shaw play on a regular basis and his late-night slot at The Stand is a rare treat for those wanting to experience his music in a more intimate venue.

His cheerful, friendly demeanour and simple set-up, just a keyboard and microphone (there are no flashy gimmicks here), give the impression that you have popped into his living room for a nightcap. What follows is a relaxing and amusing hour spent with a good friend as he spills out spontaneous, honest tales of midlife woe everyone that have everyone chortling in recognition. This is comedy with soul.

The openly gay Ian Shaw is a wee bit of enigma. Why, I asked myself ahead of tonight’s show, was a professional jazz musician, producer and singer appearing on a Stand Comedy Club flyer pictured with an orange in his mouth? Don’t get me wrong, it’s a great Steve Ullathorne pic but wtf? What I didn’t know, because I was yet to read his Q&A in the latest issue of ScotsGay magazine, is that as well as being one of the leading jazz all rounders in the country, Shaw has a growing reputation as a comedian. Camp musical comedy anyone?

To be honest, as soon as Shaw appeared on stage, launching in to his series of 'naughty songs' he had me. His ability at the piano is instantly apparent and he exudes confidence. This has the effect of relaxing you into the show. You know you're in safe hands.

The material is frequently a little crude, often nostalgic but almost always funny. Perhaps the occasional quip is a little cringe worthy, but that is more than made up for once the music kicks back in. What's not to like about a good comic parody?